I took up the hobby of model railways in 1984 and joined the Adelaide Model Railroaders inc, the same year. The AMR clubrooms were in the Mt Lofty railway station then. Seeing the trains that went through Mt Lofty station and being influenced by other members of the club who modeled S.A. prototype inspired me to get into modeling the local prototype. Also my children related more to trains that they could see in real life, they wanted a Red Hen which I have never purchased, may be someday. Models of Australian prototype were becoming available at the time as well.

After building three smaller layouts I started building the K&EFR in the year 2000 in a lined galvanized iron shed in the backyard of our house. 2002 saw me retiring from work and moving house where the K&EFR would be put into the double garage which is in the lower level of our house, something like a basement. It is warmer in winter than the shed and is able to be cooled by the house’s air conditioning in summer. Much more comfortable than that the old shed. 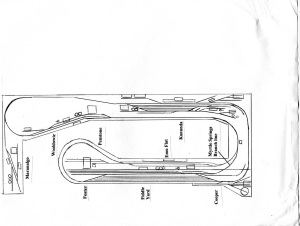 I have set the K&EFR in 1984 and although the area modeled is fictional I have attempted to model a section of mainline between Adelaide and the Victoria South Australia border with the fiddle (staging) yard representing both ends of the modeled portion of the line. Trains leaving the Cooper end of staging are said to be coming from the Adelaide area, then as they enter Foster trains are either going on toward the border or heading down to Mt Gambier or on to Melbourne. Modeling this area and era allows me to have the green Australian National livery as well as red and mustard pot South Australian Railways liveries because many had not been repainted to the AN livery at the time. Also the same thing applies to the V-Line run through trains.

Out on the modeled portion of the line the first station a train comes to is Kanunda the division point on the layout. At Kanunda the branch-line trains to Maranalgo and Myrtle Springs are made up, so there is an engine facility here, a four track yard, as well as ten industries that require shunting. On leaving Kanunda a train passes over Bindieye Creek on a truss bridge through a level crossing before entering High Mountain tunnel. As a train exits High Mountain tunnel the line to Maranalgo branches off before arriving at Wooldowie. Wooldowie has a produce dealer, goods shed, wheat silos and cattle pens. On leaving Wooldowie a train crosses Bindieye Creek again this time on a girder bridge then travels through a long cutting before reaching Jimba Jimba Junction where the line to Myrtle Springs branches off.Myrtle Springs is not modeled but is represented by a track in the staging yard. The last station modeled is Emu Flat which like Wooldowie is a typical small South Australian station having just three tracks, the main, a passing siding and a goods loop. The goods loop at Emu Flat has a goods shed, a crane, wheat silos and cattle pens. The Stonie shunts It’s hoppers into the Penstone quarry loader from Emu Flat. After Emu Flat a through train goes round big bend and crosses Five Mile creek twice on it’s way to Foster the other end of staging.

Construction wise I started by building normal L-girder bench work. The peninsula from Foster to Cooper and including Emu Flat and Kanunda is built on modules topped with 16mm particle board. There are six modules of varying lengths from 600mm to 2400mm. Track was laid on 3mm cork to within five to fifteen centimeters of the end of each module. I had the modules supported on a pair of saw horses while I worked on them. I turned the modules upside down and fixed the bus wires on to the modules. It was much easier to connect droppers from the track to the bus wires while the modules were upside down. Fitting point motors was also easier. The completed modules were fixed to the L-girder bench work on risers then the bus wires from each module were connected together using screw connectors. Once the modules were permanently fixed to the bench work I slipped lengths of track over the joins between the modules to complete the track work. 16 mm particle board roadbed was used to fill the curved sections between the various modules.

Land forms are a mixture of plaster soaked paper towels over either chicken wire or carved styrofoam and screwed up news paper covered with calico and painted with plaster. I tinted all the plaster with brown oxide colouring. Ground cover is dyed sawdust. Many of the structures are still only temporary. My scratch built structures are made from beer carton cardboard. Penstone Quarry is a Walthers kit. The silos are made of PVC pipe.

Locomotives are from AR kits, Austrains, Train-O-Rama, Powerline and a remotored Athearn and Lima. The use of dummy locos on double headed trains has allowed me to use some cheaper models and saved on decoders. Rolling stock is from Powerline, Lima, Train-O-Rama, BGB resin kits and Steam Era kits.

Monthly operating sessions are held on the K&EFR. Car cards and waybills are used to forward cars. A four to one fast clock is used giving an eight hour fast time shift to be run in a two hour operating session. Most through trains including the Overland, Adelaide Jet and Melbourne Jet are run to time table while others the roadside goods, livestock train, grain extra, and Stonie are run as extras according to train orders issued by train control. The controller keeps track of trains on a schematic on a computer screen. A friend made some detectors for the scratch built automatic block signals that also control train movements.The operating crew consists of a Controller, a Hostler in charge of the staging yard, two road crews and a Yard Master at Kanunda. For a video of an operating session watch  https://www.youtube.com/watch?v=743xI4-br4o

Although I have been working on the K&EFR for fifteen years there is still plenty for me to do including making better trees, building more structures, adding sound to more locomotives and a lot of weathering. So hopefully the K&EFR will keep me interested for many years to come. Mostly I enjoy sharing the layout during operating sessions with the friends that I have made through the hobby.

I am an active member of the NMRA and belong to the NMRA’s Operations Special Interest Group. For the K&EFR I have gained the NMRA’s Golden Spike award and I also hold the Chief Dispatchers certificate in the NMRA’s achievement programme. Other interests include reading and taking video some of which can be see on my You-Tube channel
https://www.youtube.com/user/KaEFKen1
I live with my wife and two Jack Russell terriers. We have two grown children and three grandsons. We both enjoy travel, especially in our motorhome, taking photos, and walking in the countryside.

9 thoughts on “About the Kanunda and Emu Flat Railway”